The other hand wants something too... 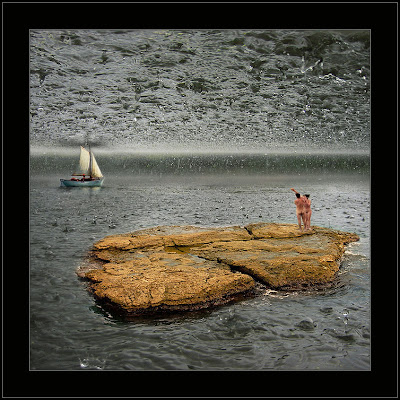 I'm sitting here early in the morning with my usual cup of coffee. It is still dark outside, so I can take it easy for a while longer. It is when it gets light outside that I feel I should get the show on the road. I think that's when the day officially starts. I feel more exposed when it is light outside and see no excuse to sit here in my bathrobe any longer. I must hop in the shower then and get dressed properly.
I do hope that I find some exciting clothes to wear. I'm in the mood for something really different. I've been wearing the same things for a while now and I need to have a good look through the rest of my clothes and see what else is there that has my name written on it. I've lost enough weight now that everything should fit, if not be too big. My skirts are hanging on my hips, but I don't want to show my bellybutton. I will not bare my stomach. It isn't pretty enough.
I'm really postponing getting out of my bathrobe, because it is so comfortable and getting under the showers is always such a horror. You don't know my shower, but believe me. I would care for a hot bath, but I have no such thing. My kingdom for a bath, but I can't give this kingdom away. I don't think the queen would agree with me. I will have to marry someone with a big bath.
I was in a relationship with someone with a big tub. It was wonderful. It was like going for a swim. I should have stayed with him just for his big bathtub. It would have almost been worth it. I've not been as comfortable in a bath since. He also had a very good shower and I haven't been in a good shower since. The showers in the Netherlands don't impress me. I'm used to large American showers with enclosed shower stalls that are roomy and waterproof. Not these leaky, drippy things they have here.
A woman does get used to her comforts. It's tough to come down in the world. You get used to nice things that work well and that turn out to be luxuries. Never take anything for granted that works well and that''s comfortable. Like your car, for instance. If it takes you places and is dependable, treat it with care. It will be your best friend. Take it from someone who has to ride her bike everywhere, or walk if the weather is bad. It's a tougher way to go if you're middle aged. Especially if something is far away and you don't go there at all, but for the grace of someone else who is willing to take you.

My coffee tastes very good this morning and it must be that special batch again that Juan picked in the highlands of Columbia. They're the very best beans, finely roasted. Ha, I wish I could afford them. I always get one of the cheaper coffees, but I think it makes no difference with the more popular brand. A gourmet coffee may taste better, but I'm not about to spend my money on that. There is a shop downtown that sells special coffees like that, freshly roasted. You have to grind the beans yourself. That would be a luxury.
I'm trying to think of the clothes that are in my closet. It is getting a little crowded in there again after I cleaned it out. It may be time for another purge. The hangers are starting to embrace each other and clothes slip to the bottom, where they land in a heap. Given my distaste for ironing, this is not good. I do think that I have a vague idea of what I'm going to wear. That gives me some hope for the rest of the day and more courage to get into the shower. It helps if you've got a plan.
I must be off now to get the day started. The trash men have come by and made their noisy pick up and the newspaper delivery boy has also been here. I think it's officially Monday now.
Have a terrific day.
Ciao,
Nora
Posted by Irene at Monday, January 03, 2011

English showers leave much to be desired too. However, I much prefer a good shower to a bath.
It is trying to snow again here. Bah!
Hope you have a lovely day.
Maggie X

Congratulations about the weightloss. You seem to really enjoy clothes.

I like showers but a good bath is really relaxing. I have loads of bath oils for Christmas so have enjoyed baths for a change.

Hope you enjoy your day.

i miss the German bath tubs, which are mostly bigger than the tubs here.But i'm luck that i have the option of a shower or bath. Have a good start to the week.